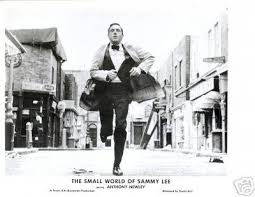 When describing his influences for the film Get Carter (1971), the acclaimed director Mike Hodges cited two films which had supremely fueled his gritty portrayal of cockney criminality. The first being Brighton Rock (1947) the film derived from Graham Greene’s book of criminality centering on the young psychopathic ‘Pinkie’. And the second, much less well known,was The Small World of Sammy Lee, directed by Ken Hughes (1963). These three films sit in a perfect triad, oozing the ambiguous romanticism of the London gangster at this time. Each focuses on its central male protagonist, both carried along and carrying this criminal world, complexly woven as both hero and villain. While Get Carter and Brighton Rock have easily passed into the pantheon of British film classics, The Small World of Sammy Lee has passed into relative obscurity. The film recently came to my attention with a series of screenings about East London being shown at the St Johns Church on Cambridge Heath Road, this particular film screened in all its glory above the alter with a short introduction by that prophet of East London, Iain Sinclair.

Hodges was so impressed by Hughes film that he employed the cameraman, Wolfgang Suschitsky, a figure previously associated with documentary film in the late 1950s and whose long tracking shots for the streets of London are the bedrock of the visual transience the film projects. The film follows Sammy Lee (played by Anthony Newley), a Jewish compare of a Soho strip club, as he dashes about the city attempting to collect enough money to pay the East End gang lord he owes following a bad night’s poker. One can see why Suschitsky was such a key figure in this film, as he came to be in Get Carter. The cinematography expresses this intense frenetic energy of Newley as he chases they money around London. His hunched pacing cunning ingenuity takes him across the East End, to his brother’s small Jewish corner shop, to the range of wheelers and dealers he can shaft or out-talk in a bid to escape his imminent predicament. It is a frantic, anxious movement which brings with it a sense of pathos for this shady character, and a melancholy at his ultimate doom. It is a frenzy also apparent in Get Carter, which famously also uses music to build suspense on long travelling shots. Suschitsky captures this all, expressing this tension not only with the character of Sammy, but as a characteristic of London itself. Really, while the story forms the structure of his journey, this is a film about London. As a friend who lived in London at that time said to me afterward the screening – I know you’re looking at this as a piece of visual history, but for me this takes me back to London as it was for me in the 60s. The shops, the clubs, the smoke filled cellars and derelict ruins, used to great effect in the final scene which is filmed in true film noir blackness. London is on view in all its multiplicity and visual vitality.

At the centre of it is Newley, well known for his early role as the Artful Dodger in David Lean’s Oliver Twist (1948), but also known to me as the strange ‘Irish’ fellow in Rex Harrison’s Doctor Dolittle (1967), and also from a successful songwriting career. Newley plays Lee with such a mix of comedy and anxiety that the film has this peculiar humour and melancholy which pervades Sammy Lee’s attempts to escape the inevitable. Alongside him, Julia Foster – bizarrely, the mother of the ever-present TV figure Ben Fogle – plays the guileless Patsy, Lee’s young love who has escaped her parents in Bradford with the hopes of a future with Sammy, only herself being drawn into his seedy world and eventually reduced to stripping for his clients. Foster plays the role as a perfect counter to the rough and wiley Newley, bringing a sense of pathos to his situation and motivation for his hopeful relief. As she says, he’s only really a boy, a young man in the city trying to make his way. Their relationship almost mirrors the relationship between ‘Pinkie’ and Rose in Brighton Rock, though in a slightly less monstrous guise, where Patsy’s innocence neutralizes the hard-dealing, undercutting desperation of Sammy as he resorts to anything to scramble out of his fix. Their parting has echoes of another film of the same year, Billy Liar(1963), directed by John Schlesinger, but performed as a play in the West End as early as 1960; in which the female character (played by Julie Christie) travels from Bradford to London in search of fame and fortune. Except in this case the scene is reversed as Patsy is shipped back to her parents in Bradford leaving Sammy to face his loan sharks head on.

While reduced to relative obscurity now, The Small World of Sammy Lee deserves a revival. It’s portrayal of London and London life brings with it an incredible view of the ins-and-outs of the city. Too often this period is dealt with only as the city of glitz and glamour, or as romanticized criminal underworld. Here is a more grey vision of the swinging 60s, which like Sammy Lee is tinted with a superficial charm but driven by murky underbelly. The two worlds revolving around each other. The film has a humour and warmth to it, but as Sammy’s final comic compare introduction to the slimy clients of his club shows, there is a hollowness and hardness behind this veneer of comedy which displays a stark reality. As he says, behind their smiles and guiles these women hate their customers. The act is all a façade. At the end of the film, in a dark quarry of rubble at the edge of the city, the façade is stripped and this film reveals itself in all its darkness and gritty realism.

This review was written in 2013 by Bea Moyes and originally published by Litro.